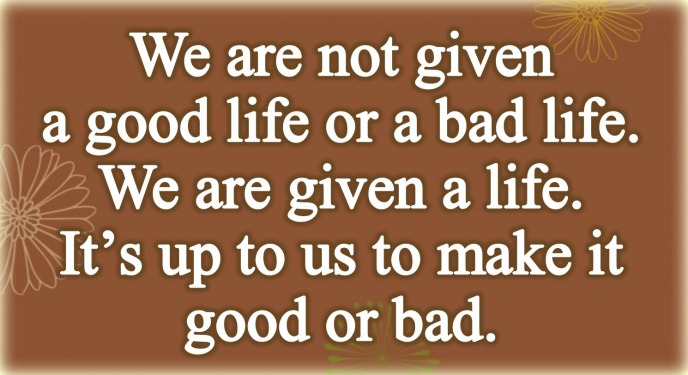 Sometimes you may think that the life you were “given” was bad from the get-go, that you didn’t have a chance to make your life good.

But really, we are all given the same life. It’s what we do with it that makes it good or bad. “We are not given a good life or a bad life. We are given a life. It’s up to us to make it good or bad”. ~Ward Foley.

This quote assumes you’ve reached the age to make your own decisions and can shape your own life. You know right from wrong and you are capable of deciding what is “good” in the world and what is “bad”.

A lot of us start out with deficits as children. You may be born into poverty, abuse, absent parents and other situations that may be obstacles in your young life.

I saw a movie the other day about a young man who had grown up in a home of poverty and abuse. They had nothing as children.

They had holes in the floor of their home, they rarely had a hot meal and their clothes were passed down from whatever families gave to the local Church.

On the day he turned sixteen, he walked to a local burger joint and asked for a job. The manager knew his mother and hired him. The manager gave him as many hours as he could.

About six months after starting working, he asked if he could work as late at night as he could because he wanted to see if he could get a job with someone else early in the morning.

When the manager asked him when he planned to sleep, he told him that he’d sleep between his two jobs. The manager knew he needed the money and gave him the late shift.

Before too long, he had saved up enough money for an apartment. He then got his mother and siblings away from his abusive father and moved them to the apartment. And then he worked. And he worked.

That was 45 years ago and he now heads up a major US Corporation. He took his life and made it good.

Whatever life you are given, take it and make it good.  Make it beautiful.

Sending you blessings from Sterrett, Alabama!