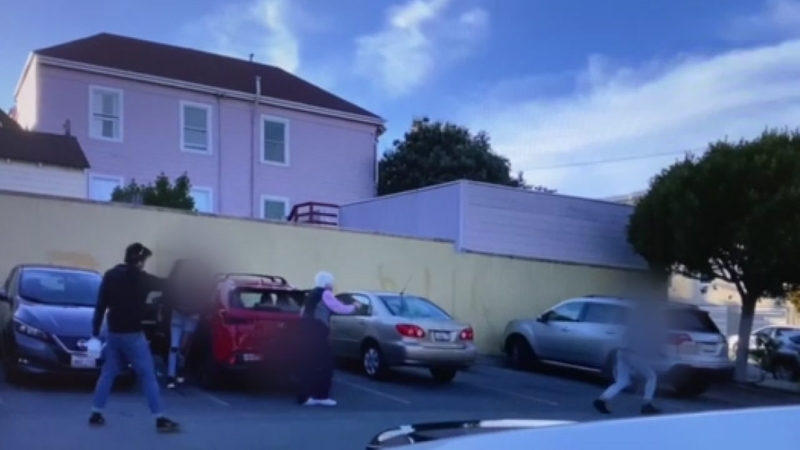 SAN FRANCISCO, California — A recent college graduate said he had the ultimate adrenaline rush after saving a 75-year-old woman, who was attacked and carjacked at a grocery store in San Francisco.

“I could barely sleep that night,” said the young man, who did not want to be identified

Surveillance video from a witness shows the moments the good Samaritan realized something was very wrong while walking out of Safeway around 5 p.m. on Thursday.

“I’m walking across the parking lot, and I see this old woman being dragged across by her head, these girls are punching her and kicking and stomped on.”

According to police, a 75-year old woman walking back to her Lexus was attacked by three young women who took her keys and purse and tried to take her car. That’s when the man sprang into action, dropping his jug of almond milk and jumping on the back of the vehicle.

“Honestly, I’m still trying to find out why I did this one … but I just punched through the back window, and it was loud. It was loud enough and kind of scary enough to freak them out,” he said.

Video shows the suspects get out of the woman’s car and approach a nearby waiting vehicle. The good Samaritan then makes his way to the vicitm to comfort her.

Witness described the victim as “tough as nails.” She declined treatment at the hospital.

“She thanked me, and she said I don’t have to pay for her windshield her back window, so that’s really nice,” the good Samaritan said.

One of the suspects was arrested a few days later and police continue their investigation. The young man is happy he didn’t forget to pick up his almond milk saying, “that stuff’s not cheap,” and wishes the woman a speedy recovery.

He sends her this message. “I think I would say [to her] stay strong, the community has your back.”