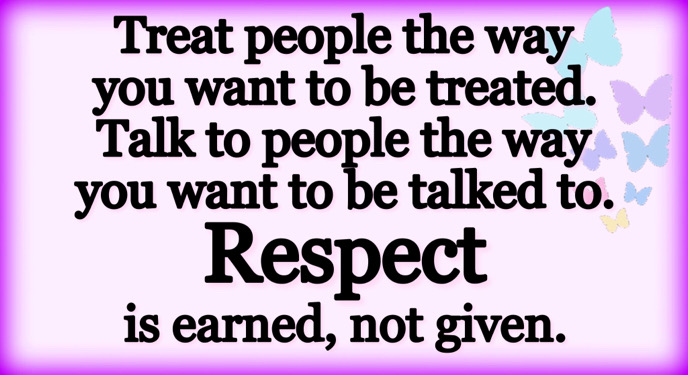 I have a question for you: Where has respect gone? It seems to be a distant concept, something people did “back in the day”.

What’s happened? Children and young people do not seem to respect each other and most show no respect toward the elderly and disabled.

Maybe it’s just me, but it seems like younger people do not have role models from whom to learn respect. Today, it seems to be more about parents respecting their children’s “personal spaces”.

When I was growing up, respecting my family, especially my mother and grandmother, was as natural as breathing.

We didn’t know it any other way. And I just have to say that if I had ever treated either one of them with lack of respect, well, let’s just say you wouldn’t be reading this right now.

I’m smiling as I write this. In all seriousness, we didn’t know another way. We knew how to respect because we had good role models. And that plays the largest role in how I treat others.

Respect has to be earned, but one of the ways you earn it as a parent is making sure that your children know that they should at all times respect you. And if they don’t, there should be serious consequences.

I’m not preaching here. I just don’t understand where respect has gone. It’s like it has packed its bags and gone on an extended vacation.

As parents we should treat everyone, including our own children, with respect and care. Our words, our voices, our tones should always be kind and respectful toward others.

Only when you give respect, do you receive it back.

Sending you blessings of love and kindness from Sterrett, Alabama!