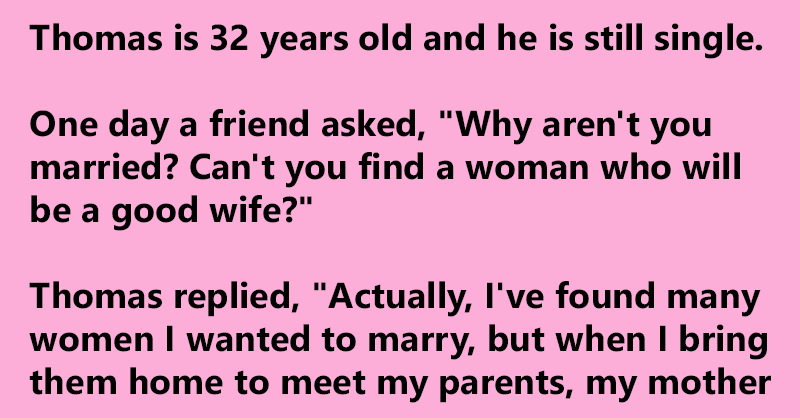 Thomas is 32 years old and he is still single.

One day a friend asked, “Why aren’t you married? Can’t you find a woman who will be a good wife?”

Thomas replied, “Actually, I’ve found many women I wanted to marry, but when I bring them home to meet my parents, my mother doesn’t like them.”

His friend thinks for a moment and says, “I’ve got the perfect solution, just find a girl who’s just like your mother.”

A few months later they meet again and his friend says, “Did you find the perfect girl? Did your mother like her?”

With a frown on his face, Thomas answers, “Yes, I found the perfect girl. She was just like my mother. You were right, my mother liked her very much.”

The friend said, “Then what’s the problem?”

A man walks into a bar. He reaches into his pocket and pulls out a little man, maybe a foot tall, and a little piano.

He puts them both on the bar and the little guy starts playing Mozart as the man orders his drink.

The bartender says “I’m sure it’s none of my business, but where did you find a little man who plays piano like that?”

The guy says “There’s a genie outside granting wishes, I bet he’s still there if you hurry.”

The bartender runs outside, and moments later a bunch of ducks come in through the front door and start causing a big ruckus.

The bartender says “You didn’t tell me the genie was deaf, I asked for a million bucks, not a million ducks.”

Do you really think I asked for an eleven inch pianist?”