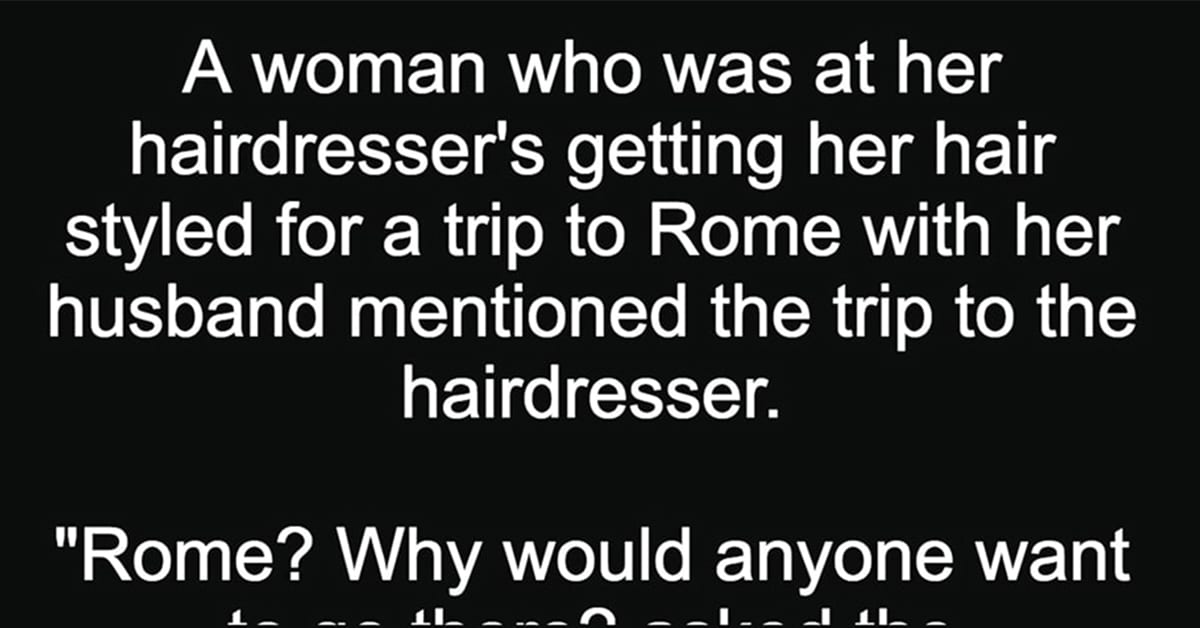 A woman who was at her hairdresser’s getting her hair styled for a trip to Rome with her husband mentioned the trip to the hairdresser.

“Rome? Why would anyone want to go there? asked the hairdresser. “It’s crowded and dirty. You’re crazy to go to Rome. So, how are you getting there?”

“We’re flying on Continental,” she replied. “We have a good price!”

“Continental?” shouted the hairdresser. Their planes are old, their flight attendants are ugly and they are always late. That’s a terrible airline. So, where are you staying in Rome? ”

“We will be at this little exclusive place called Teste on the Tiber River.”

“Do not go further. I know this place. Everyone thinks it’s going to be special and exclusive, but it’s really a dump.”

“We’re going to go to see the Vatican and maybe get to see the Pope.”

“That’s rich,” laughed the hairdresser. “You and a million other people trying to see him. He’ll look the size of an ant. Boy, good luck on this lousy trip of yours. You’re going to need it.”

A month later, the woman came in for another hairdo. The hairdresser asked her about her trip to Rome.

“It was wonderful,” explained the woman, “not only were we on time in one of Continental’s brand new planes, but it was overbooked, and they bumped us up to first class. The food and wine were wonderful, and I had a handsome 28-year-old steward who waited on me hand and foot.”

“And the hotel was great! They’d just finished a $5 million remodeling job, and now it’s a jewel, one of the finest hotels in the city. They, too, were overbooked, so they apologized and gave us their owner’s suite at no extra charge!”

“Well,” muttered the hairdresser, “that’s all well and good, but I know you didn’t get to see the Pope.”

“Actually, we were quite lucky, because as we toured the Vatican, a Swiss Guard tapped me on the shoulder, and explained that the Pope likes to meet some of the visitors, and if I’d be so kind as to step into his private room and wait, the Pope would personally greet me.

Sure enough, five minutes later, the Pope walked through the door and shook my hand! I knelt down and he spoke a few words to me..”

He asked me, “Who screwed up your hair?”

It’s not a true story, it’s funny, so I just had to share it here.