Home
Entertainment
The Hypnotist At A Senior Home. This Will Blow Your Mind.

The Hypnotist at a Senior Home

It was entertainment night at the senior citizens’ centre.

After the community sing-along led by Alice at the piano, it was time for the start of the show – Claude the Hypnotist!

Claude explained that he was going to put the whole audience into a trance.

“Yes, each and every one of you and all at the same time.” said Claude.

The excited chatter dropped to silence as Claude carefully withdrew from his waistcoat pocket; a beautiful antique gold pocket watch and chain.

“I want you to keep your eyes on this watch,” said Claude, holding the watch high for all to see.

“It is a very special and valuable watch that has been in my family for 6 generations,” said Claude.

The audience became mesmerized as the watch swayed back and forth.

The lights were twinkling as they were reflected from its gleaming surface.

A hundred and fifty pairs of eyes followed the movements of the gently swaying watch.

And then, suddenly, the chain broke!!!

The beautiful watch fell to the stage and burst apart on impact!

It took them three days to clean the Senior Citizens’ Center – and Claude was never invited back again. 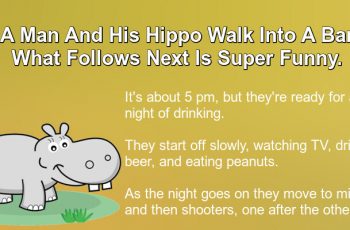 It’s about 5 pm, but they’re ready for a good …
Paddy McCoy, an elderly Irish farmer, recently received a letter …