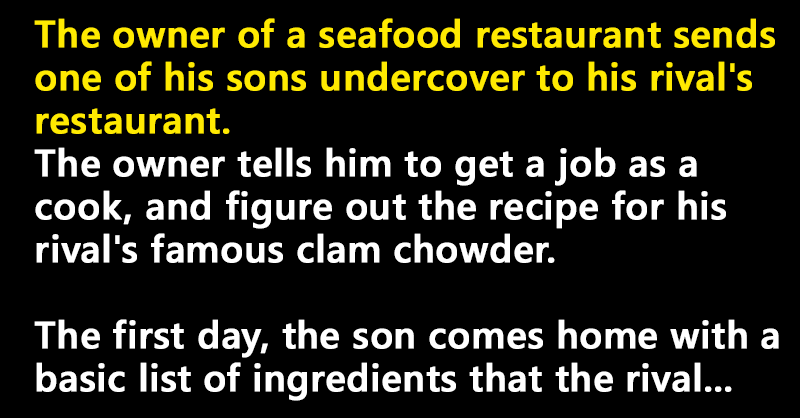 The owner of a seafood restaurant sends one of his sons undercover to his rival’s restaurant.

The owner tells him to get a job as a cook, and figure out the recipe for his rival’s famous clam chowder.

The first day, the son comes home with a basic list of ingredients that the rival uses. They try making it, but it doesn’t turn out the same. The owner sends him back.

The second day, the son comes home having watched the rival chef prepare the chowder. They try again to make it, and it’s close, but the consistency is off, it’s too watery. They try to figure out what they’re doing wrong, and the son realizes that he was distracted for a minute while the chef did something.

“He must have added a secret ingredient, one not on the list, while you looked away!” concludes the owner. He sends his son back for a third day, this time telling him not to take his eyes off the chef for a second.

The son comes back the next day excited.

“You’ll never believe what I saw!” he says. “He did have a secret ingredient, it’s a piece of paper!”

“Yeah, he keeps a stack of printed paper in the kitchen. It’s a bunch of Wikipedia articles he’s printed out, of various movies. When he makes the chowder, he tears out the synopsis of a movie from one of the articles and puts it in. It’s the strangest thing, but that’s the secret ingredient.”