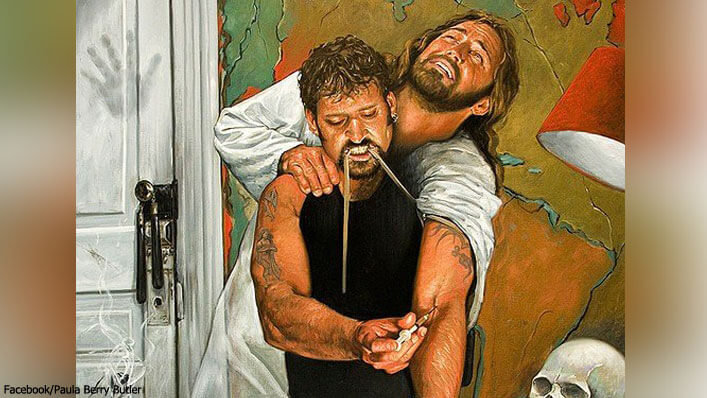 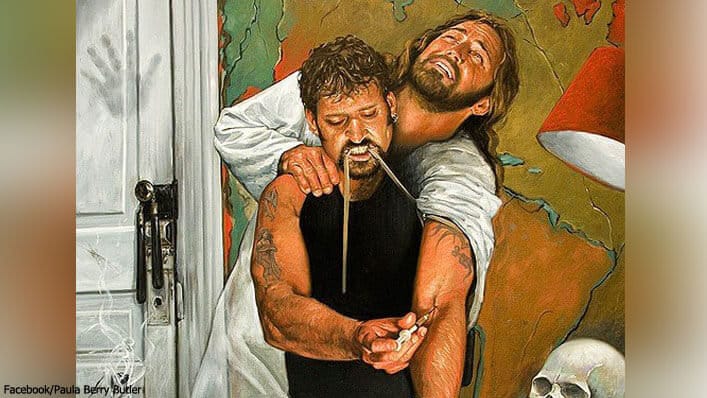 When Paula Berry Butler spotted a poignant powerful painting in a shop window in Gatlinburg, she was stopped dead in her tracks. It was a depiction of a man shooting up heroin into the arm of Jesus. While the man appeared to do so effortlessly and painlessly, the face of Jesus was wrought with pain as he took the sinner’s vice upon himself.

Paula had to go inside the store to understand more about the meaning behind this powerful painting, that she believes should be hung in every rehab, prison, and emergency room.

When she went inside, Paula learned the story behind the muse in the painting who became a pastor after recovering from his own heroin addiction.

Read how the rest of the painting’s backstory unfolds in the viral Facebook post below that has now been shared over 280,000 times:

“Saw this powerful painting today in the window of a shop in Gatlinburg. I was shocked but it gave me the chills.”

My friend Garry & I thought it should be hung in every rehab center, jail and hospital E.R. Went into the shop and the young woman working there came over to chat. She said she was a recovering addict…wanted to quit that life so took her children away from it. Told her would-be employer the truth and thankfully he gave her the job. We asked if her family supports her now…she said no, they are ALL addicts. She found her 23 year old sister dead on a park bench, needle still in her arm. I told her I was sorry & mentioned I had lost my daughter when she was 29.

At this point I have tears in my eyes and so did she. She comes over and gives me the biggest hug. She said she knows the model for the addict in the painting…a former addict himself who is now a pastor! He had kept his heroin kit for years in a bag without knowing why…it is now part of the painting. When the artist was done he threw it away. She asked if I noticed there are only 3 arms in the painting and I said yes. She said at this point the addict isn’t feeling any pain but it hurts Jesus when we hurt ourselves. I told her to stay strong, I believe God has other plans for her. We left, but not before I gave her a hug. I pray that God gives her the strength to stay clean and I pray that she has a happy and good rest of her life.?