Home
Entertainment
Mr. And Mrs. Thomas Were Both 102 Years Old.

They had been married for 74 years.

The local television station sent a news crew out to interview them.

“What we need to do,” the reporter explained,

“is to interview you separately. It just seems to make for a better write-up, when we do it that way. So, if you don’t mind waiting, Mrs. Thomas, we’ll go out on the porch with your husband and visit with him for a few moments first.”

After they were settled on the porch, the reporter began his interview.

“Mr. Thomas, I know you get tired of people asking you this, but what do you think is the cause of your longevity?”

“I get up early every morning. I eat pretty good, you know, garden food and such….and…oh, yeah! God talks to me!”

The reporter stared up at him to see if he was kidding.

“You mean God actually talks to you?”

“We’re pretty close. In fact, when I have to get up and go to the bathroom during the night, God even turns the light on for me.”

The reporter quickly excused himself and went in search of Mrs. Thomas.

“I don’t mean anything unkind by this, Ma’am, but is Mr. Thomas okay… mentally, I mean?”

“Why?” she asks curiously.

“Well, he says that when he goes to the bathroom at night, God turns on the light for him,” the reporter explained.

“Has that old fart been pissin’ in the refrigerator again.”

A wife comes home late one night and quietly opens … 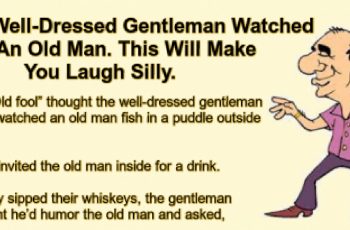 Poor Old fool” thought the well-dressed gentleman as he watched …