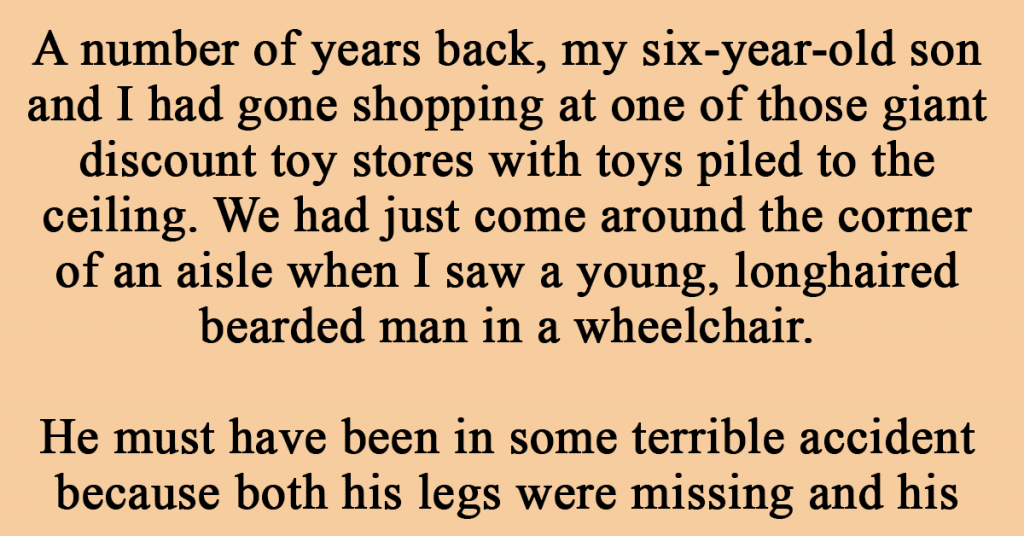 Kids of any age have a reputation for not thinking before they speak. Often, they may say inappropriate things, but not with mal-intent, but rather out of ignorance. It’s a part of the growing up process (well, some folks never grow out of it, but…). And as parents, we are sometimes on guard when we see someone who makes us feel a bit uncomfortable, such as a person with a disability. We worry about what our kids might say and are ready to correct them at a moment’s notice. However, as the mom in this fictional story learns, it’s sometimes better to give your kids the benefit of the doubt before chastising them.

A number of years back, my six-year-old son and I had gone shopping at one of those giant discount toy stores with toys piled to the ceiling. We had just come around the corner of an aisle when I saw a young, longhaired bearded man in a wheelchair.

He must have been in some terrible accident because both his legs were missing and his face was badly scarred. Just then my six-year-old saw him, too, and said in a loud voice, “Look at that man, Momma!”

I did the normal mother thing and tried to shush my son, telling him it was not polite to point; but my son gave a hard tug, broke free from my hand and went running down the aisle to the man in the wheelchair. He stood right in front of him and said in a loud voice, “What a cool dude earring, man! Where did you get such a neat earring?”

The young man broke into a grin that lit up his face. He was so taken aback by the compliment that he just glowed with happiness, and the two of them stood there talking awhile about his earring and other “cool stuff.” It made a lifelong impression on me.

For I had seen only a horribly scarred man in a wheelchair, but my six-year-old saw a man with a cool dude earring.