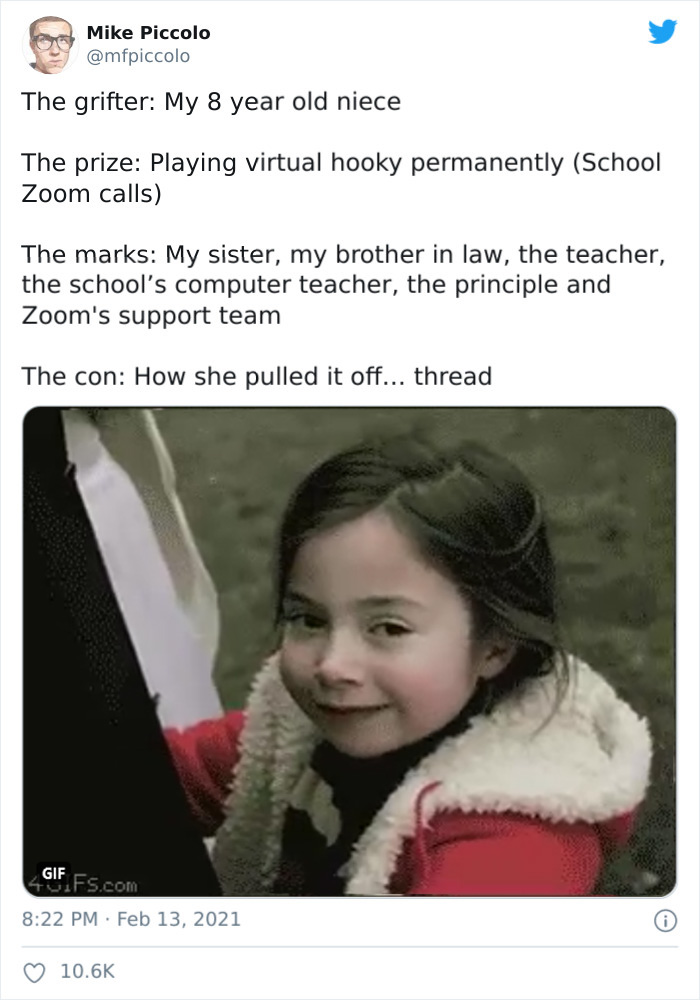 Never underestimate the power of an 8-year-old. In fact, never underestimate the power of any kid. Period. While kids are like blank slates that are gradually filled up with information and skills, they often have one amazing advantage over us adults, and that is thinking outside the box, unrestricted by the cultural, social, and whatever other norms that frame the way we think.

If you do end up underestimating a kid, just brace yourself for impact as your kid might somehow end up finding a Zoom exploit and be deliberately milking it as much as possible to get out of school all the while driving you, your kid’s teacher, your friends, and your family bonkers as you try to figure out why Zoom refuses to work for her for weeks!

While physical classrooms today are mostly empty and unused, online classroom are full of eager students 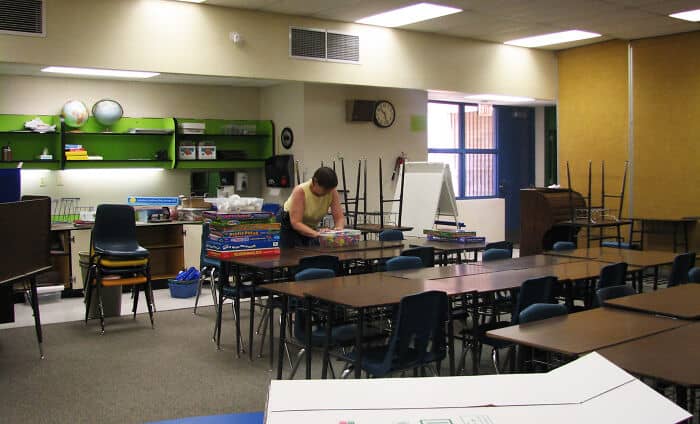 Well, OK, not all are eager, as explains this Twitter user in his story about how his 8-year-old niece found a Zoom exploit and used it to skip school 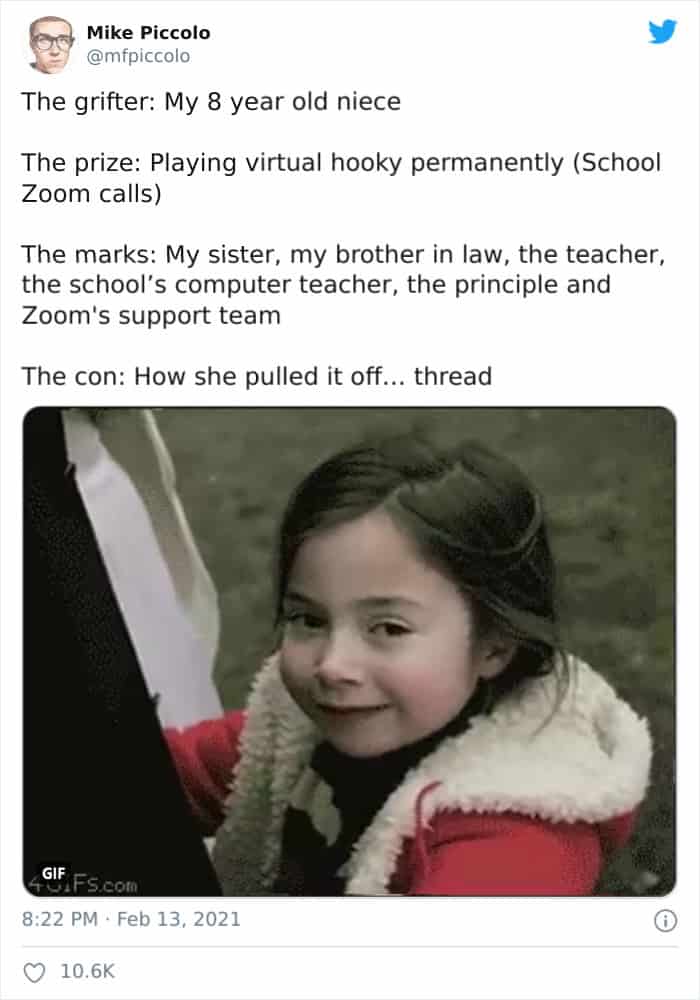 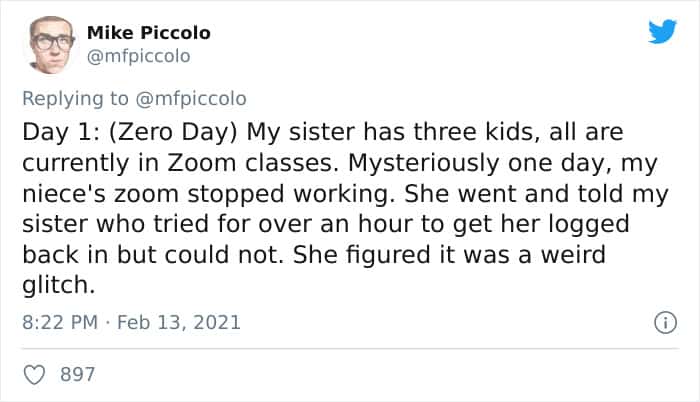 Meet Mike Piccolo, a software developer and entrepreneur from Sacramento, California who recently went to Twitter to share a story of how his 8-year-old niece was supposed to have Zoom classes, but kept running into some technical problems. Bored Panda got in touch with Piccolo for an interview about his Twitter thread.

In particular, said technical problems were the fact that she was constantly being logged out, and when she attempted to log back in, it would say that her password was incorrect. As soon as Zoom would stop working, Mike’s sister would jump in and help troubleshoot things. Each time she’d do so, there’d be no result, even after an hour or so of trying to fix it.

“At some point, my niece accidentally entered the wrong password a few times in Zoom. She then went and got my sister who tried to log her in and couldn’t get her back in right away so she got to skip class. My sister didn’t know that my niece accidentally entered the password incorrectly a bunch of times already which is what setup the scheme. In short, the first time was an accident but the light bulb clicked so she tried it again the next day,” explained Piccolo how it all started. After several tries (spanning across several days), the teacher was actively involved. After hours of trying to figure the mystery out, they decided to try doing the same thing from a friend’s house. Long story short, the same issue happened.

It didn’t stop there. Zoom support was also contacted, hours were spent figuring it all out, and yet again to no avail. Soon after the kid would log into a Zoom classroom, it would eventually log her out and refuse to let her log in.

This continues for days, and eventually involves the mom, the teacher, and even Zoom tech support

It became such a huge problem, lasting weeks, that the mom resorted to homeschooling But, they wanted to try again with Zoom, and this time around the niece was caught slipping Weeks later, Mike’s sister wasn’t even trying to do Zoom schooling any more; they reverted to the good old homeschooling method, which was impeccable, but surely not a long-term solution. So they tried again: the 8-year-old was sent back to the sister’s friend’s house because the whole logging out issue was less of an occurrence there.

Lo and behold, the 8-year-old runs into the same problem. Except, this time the friend happens to notice what went down—the kid logged out herself.

Turns out, the niece was logging herself out and abusing an exploit in Zoom to keep her logged out When confronted about it, the young lady explained that it wasn’t working well, so she was trying to fix it by logging out. The friend was skeptical, and she actually caught on to the ruse, but was nonchalant and simply left the room.

Several spy sessions later, she figured out what was going on—the cat was out of the bag. Turns out, the 8-year-old figured out an exploit in the system and was using it to her advantage.

Said exploit involves entering the password loads of times until the account gets locked, except it doesn’t say that And each time the account is locked this way, the lock period gets progressively longer. She has effectively found a way to stay out of school without raising suspicion that it was her doing.

Instead, the system blames the password—a mystery that took 8+ adults and 3 weeks to figure out

So, for a whole three weeks, Mike’s sister, her friend, the teacher, Zoom tech support, and others were being led on a magnificent journey of pain and torture trying to figure what was going on with the computer, when reality showed that it was all the doing of a very clever 8-year-old. Bravo! Despite all of this, Mike was pretty proud of her. As someone who works in the IT industry, why wouldn’t he be? This is, if anything, a quality assurance specialist in the making, and a talented one at that!

“Luckily for me, I am the uncle so I don’t have to worry about disciplining. Uncles get to be on the kids side. I talk with my sister about once a week, so I was getting updates on the issue before anyone figured it out. It was shocking to hear that it was my niece all along, but it was also incredibly impressive. She was able to pull off skipping school for weeks right under the noses of a bunch of adults who were trying to figure out the issue,” elaborated Piccolo.

“I work in the IT field, so her story reminded me of issues I see with user experience, quality assurance and security. Most people think hacking is deeply technical, but in most cases it is the combination of a defect or flaw in a system combined with some social component. In this case the social component was her innocence. ‘It can’t be the sweet eight year old girl’”

What the niece did was not good, sure, but Piccolo was proud of her—turns out she has a bright future as a quality assurance specialist at the very least

“She is a sweet girl, so she hasn’t done anything tricky since then. My sister did all of the things a good parent should have done here: grounding, no electronics outside of schoolwork, written apologies to everyone affected, etc.” explained Piccolo the aftermath of this ingenious prank. “They were both interviewed recently and they asked my niece if she was going to pull any more hyjinx and she answered ‘I don’t know, maybe’. My sister replied ‘What!!?!’ I guess we will have to wait and see.”

Mike’s tweets gained some traction on Twitter, and even found themselves on Imgur, where they were viewed over 130,000 times and gained over 4,400 upvotes. And yes, this surely came as a surprise to Mike: “The first day I sent out the tweet I think it got 5 likes. I was a little disappointed because I thought it would get a little more traction but I never thought it would get anywhere near the attention is has got by now. By day two it started getting shared at a steady pace and it was clear that it struck a nerve.”

“I think people are empathizing with my niece. She wants to go back to school, hang out with her friends and get attention from her mom. There is no doubt what she did was wrong, but it seems like a lot of people can see where the motivation was coming from. That and the fact that kids doing whatever they can to skip school is a tale as old as time.”

What are your thoughts on this? Have your kids come up with anything deviously genius like this? Let us know in the comment section below!