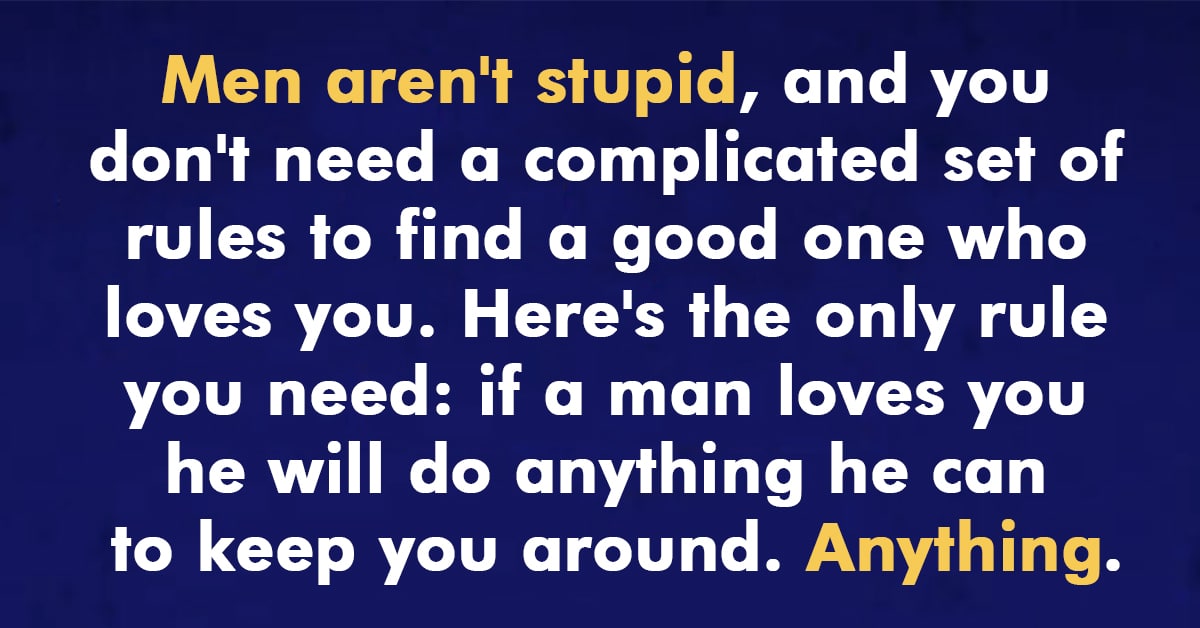 “If a man loves you.. he’s willing to profess it. He’ll give you a little after a while. You’re going to be his lady, his woman, his fiancee, his wife, his baby’s mama. SOMETHING.” ~ Steve Harvey

If a man loves you, he’ll never let you go

Stop wasting your time on men who are not interested in you. A man who’s really interested will make it known.

Stop wondering why the man in your life hasn’t made the effort that he should have. Stop wondering what’s going through his mind, stop making excuses and stop finding roundabout reasons that excuse his behavior.

The only answer is the one you do not want to face: he is not interested. A man who wants you will make an effort. That’s all there is to it. If it sounds complicated, that’s because you just haven’t accepted that this man isn’t as interested in you as you are in him.

Your man is not confused. He’s certainly not spending as much time thinking about you as you are about him. Things won’t get better if you give him time. The guy knows exactly what he’s interested in, and it’s clear that your entire being doesn’t meet that requirement. He only wants part of you, part of the time. That’s why he only makes an effort when trying is easy for him. That’s also why his efforts don’t feel genuine or complete. Deep down, you’re aware that he isn’t meeting your standards.

You will want to believe that he shies away because he is intimidated by your independence, freedom, and personality. It’s not true. He isn’t busy with his family or work, either. You have heard it all before. It’s just another tired list of excuses. Men who truly care for you will make you a priority. He’ll be willing to put other things aside so that he can be with you. But your man is only there for his own convenience.

For centuries, men have been the ones responsible or making the first move and initiating the relationship. A man will go to a woman that they’re thinking about constantly. If your man doesn’t have time for you, that just means you aren’t on his mind. No matter how much you yearn for him to love you, he won’t care. You can’t avoid this. People love to interpret their bonds and relationships however is the least painful.

It’s time to accept the truth. Or if you are not ready yet, you should begin to mentally prepare yourself for the end. The man does not want you the same way you want him. He’s not interested. A man who is interested will do everything in his power to keep a woman they love to themselves. He will make it clear that she’s important to him, and that he’s afraid of losing her. Does your man do that? He should. If he cared about you, he would.

Stop hurting yourself for men who are never going to care. You deserve better. You deserve to have a man who cares so much about you that he redefines the meaning of love. He should change his whole worldview. He should love you so much that he knows he’s never experienced a love like it before. He shouldn’t ever be willing to risk the loss of what you have. He should be an inspiration. He should text you first, text you back, take your calls, never get sick of you, and give you honest when you need it. He should be a man who gives his all to you and the relationship. And you should know that you deserve it.

You have no reason to wait for someone who will never be there. If your man does not know what pain he is causing you, he’s not worth your time. You should not let yourself get used to being treated like you aren’t a priority. You should always know exactly how much you are worth. If the relationship isn’t making you happy, it’s your job to leave. Don’t just tell yourself that you deserve things. Remind yourself constantly that true love does exist. It’s better to be single and wait for true love than to be in miserable relationships just to have a man.

All you need to do is turn around. Shut the door on your inadequate man so that you can make a path for the right person. You should just take one step at a time. Break it down into manageable chunks. You deserve to be happy.

How many of you have found yourselves making excuses for the men in your lives? Are you through with that now?

The post Men aren’t stupid. appeared first on Wake Up Your Mind.