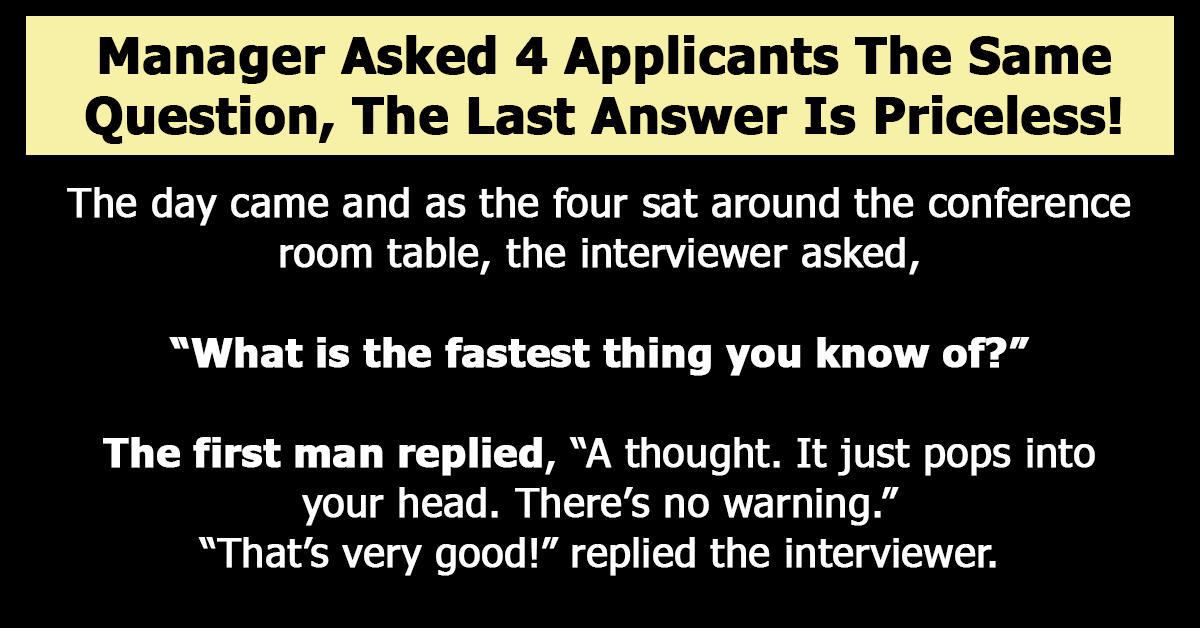 A manager at Walmart had the task of hiring someone to fill a job opening. After sorting through a stack of resumes, he found four people who were equally qualified. He decided to call the four in and ask them only one question. Their answer would determine which of them would get the job.

The day came and as the four sat around the conference room table, the interviewer asked,

“What is the fastest thing you know of?”

The first man replied, “A thought. It just pops into your head. There’s no warning.”
“That’s very good!” replied the interviewer.

“And, now you sir?” he asked the second man. “Hmm, let me see, a blink! It comes and goes and you don’t know that it ever happened. A blink is the fastest thing I know of.”
“Excellent!” said the interviewer. “The blink of an eye, that’s a very popular cliché for speed.”

He then turned to the third man, who was contemplating his reply. “Well, out at my dad’s ranch, you step out of the house, and on the wall there’s a light switch. When you flip that switch, way out across the pasture, the light on the barn comes on in less than an instant. Yep, turning on a light is the fastest thing I can think of.”

The interviewer was very impressed with the third answer and thought he had found his man. “It’s hard to beat the speed of light,” he said.

Turning to Bob, the fourth and final man, the interviewer posed the same question.
Old Bob replied, “After hearing the previous three answers, it’s obvious to me that the fastest thing known is Diarrhea.”

“What!?” said the interviewer, stunned by the response. “Oh sure,” said Bob. “You see, the other day I wasn’t feeling so good, and I ran for the bathroom, but before I could think, blink, or turn on the light, I had already sh*t my pants.” Bob is now the new greeter at a Walmart near you!