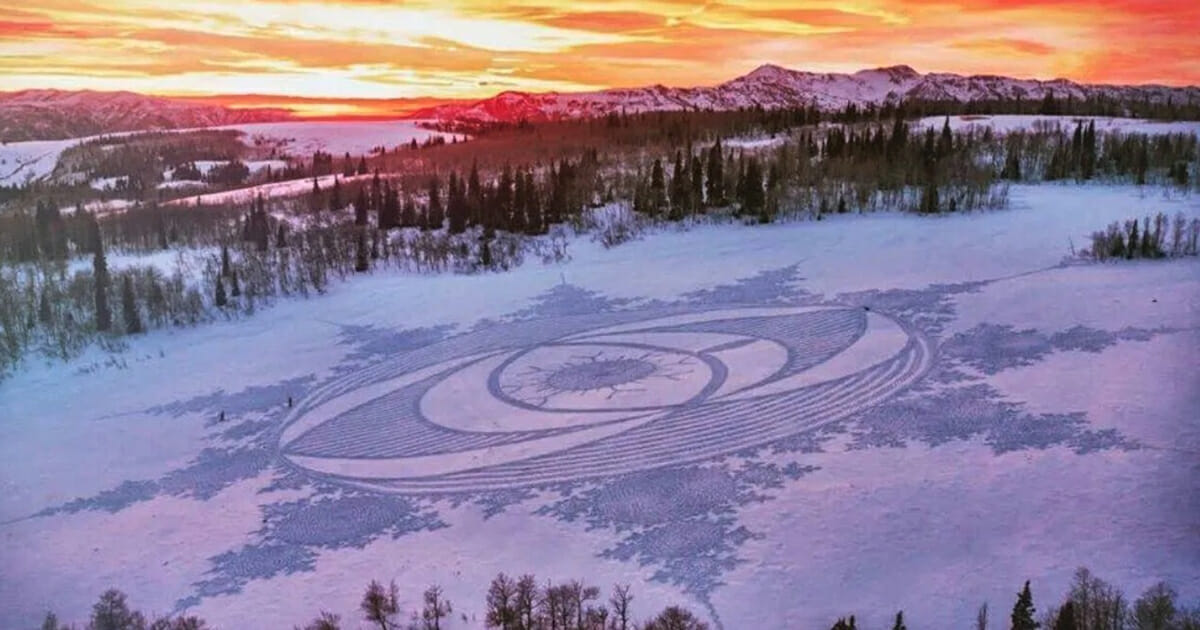 What started out as a fun hobby has ended up captivating the world and causing a viral sensation.

Simon Beck studied engineering at Oxford University and went on to be a freelance map maker. But, for fun he’d spend around 11 hours running over 20 miles to create beautiful shapes in the snow – a hobby that has turned into a living for the talented artist.

For the last decade he has decorated the Alps with these giant stunning images which are over 300 ft by 300 ft big but has recently branched out to creating them in sand.

Armed with just a compass and a pair of snow shoes Simon’s creations are always mathematical patterns; he prefers geometrical patterns saying they are easier to do from memory.

“You are just following simple rules. You don’t have to keep referring to a diagram. You can do it from memory. And they just look the best,” he told The Guardian newspaper.

Starting with one path and never veering off it, his 300 plus designs have earned him praise around the world, but the fact they don’t last very long doesn’t bother him, as an aerial photograph is taken of each one.

“Most people will only ever see most of the world’s artwork as photographs,” he said in an article in Artsy. “Even with the Mona Lisa—probably only a minority of people have actually seen the real thing, but everyone’s seen a photograph of it.”

Simon has over 200,000 followers on Facebook and more than 30,000 on Instagram with his latest art work posted last month in the Les Arcs ski resort in France.

He spends the first hour measuring out points and describes how he often has to go back over his path for food breaks.

“Once you have been going about an hour you get quite a network of tracks going through the area of the drawing and you can get from A to B quite easily. You will always end up backtracking because you get hungry to go back to the start to get your food,” he told The Guardian.

The 60-year-old Londoner now makes a living out of selling photographs of his amazing art.

And if you thought snow art came with its challenges then sand drawings pose even bigger challenges as he has to time his work with the tide as well as having to work around wind and other beachgoers.

Sometimes he creates art to make important statements like the 77 unshaded triangles in this piece which represent “the 77 countries where LGBT people are given a hard time.”

The commission pieces he’s been asked to do take him away from his usual geometrical designs and have led him to create a wolf at Lake Louise in Alberta Canada and a “twisted six-pointed flower” at Utah’s Powder Mountain.

Simon was also the subject of a short film in Norway, which was selected for National Geographic’s short film showcase.

Please share Simon’s images with all those who you think would appreciate his stunning artwork.