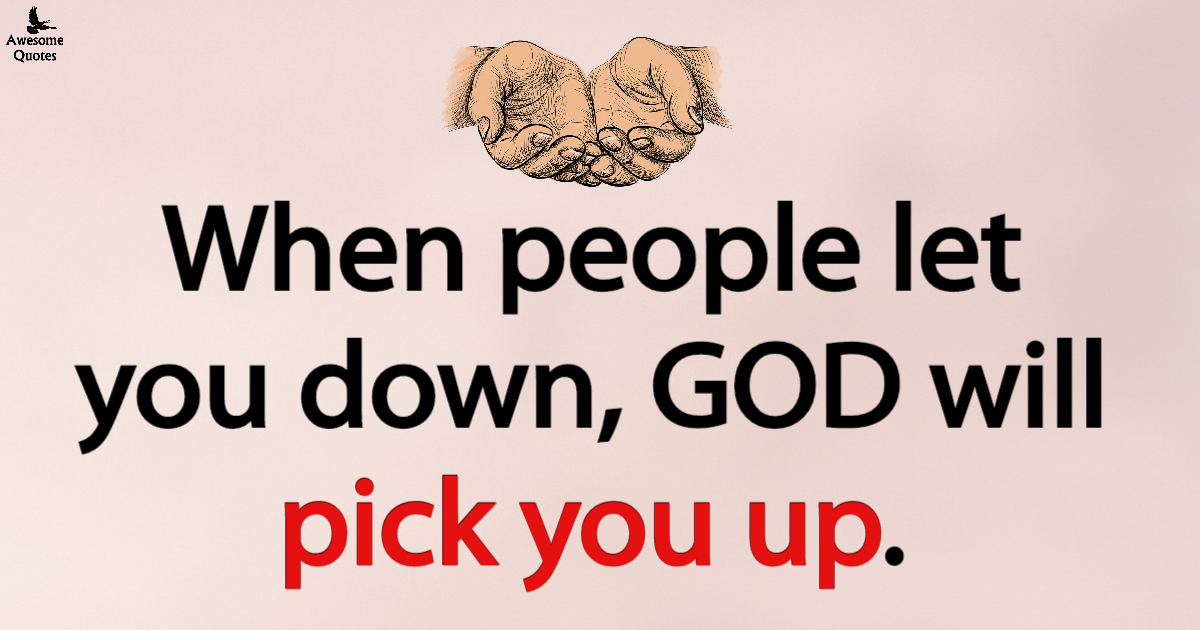 When people let you down, GOD will pick you up.

“When the Lord makes it clear you’re to follow Him in this new direction, focus fully on Him and refuse to be distracted by comparisons with others.”― Swindoll Charles R

“But I came to learn that God never shows us something we aren’t ready to understand. Instead, He lets us see what we need to see, when we need to see it. He’ll wait until our eyes and hearts are open to Him, and then when we’re ready, He will plant our feet on the path that’s best for us…but it’s up to us to do the walking.”― Immaculee Ilibagiza

“God’s relationship with man does not work in a way in which man stumbles and then God has to drop what he is doing in order to lift him up; rather, man stumbles so that God can lift him up. Hence it is utterly impossible to truly diminish his glory.”― Criss Jami

“God doesn’t work on our timetable. He has a plan that He will execute perfectly and for the highest, greatest good of all, and for His ultimate glory.”― Charles R. Swindoll

“The will of God prevails. In great contests each party claims to act in accordance with the will of God. Both *may* be, and one *must* be, wrong. God cannot be *for* and *against* the same thing at the same time. In the present civil war it is quite possible that God’s purpose is something different from the purpose of either party – and yet the human instrumentalities, working just as they do, are of the best adaption to effect His purpose.

I am almost ready to say that this is probably true – that God wills this contest, and wills that it shall not end yet. By His mere great power, on the minds of the now contestants, He could have either *saved* or *destroyed* the Union without human contest. Yet the contest began, And, having begun He could give the final victory to either side any day. Yet the contest proceeds.”― Abraham Lincoln