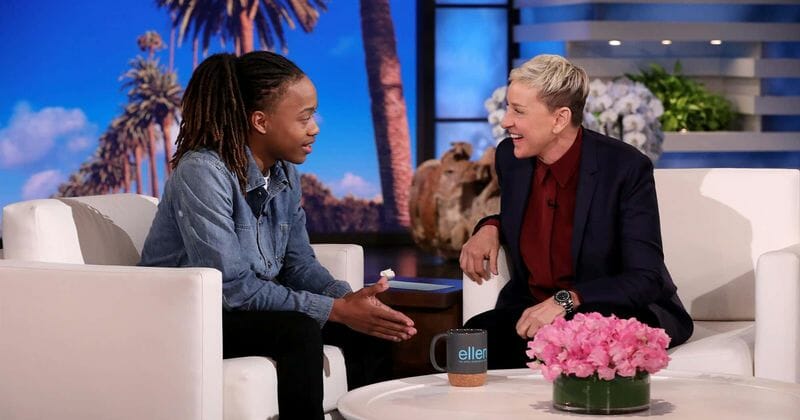 If you’ve had half an eye on the news recently, you’ll have heard DeAndre Arnold’s name.

Arnold is a senior at a high school in Texas, and was told he would have to cut his dreadlocks off or miss out on his own graduation. As per reports, the school said they would ban Arnold from his graduation walk if he refused, sparking a great deal of controversy.

Rightfully, DeAndre decided to take a stand against the prejudice. As a result, he’ll be forced to attend an “alternative school”, despite the fact his grades are good.

He recently appeared on The Ellen Show, explaining to Ellen just why it was so important for he and thousands of other Americans that he stand his ground. As per NBC News, Ellen awarded him a $20,000 scholarship.

The much-loved talkshow host reassured DeAndre that she was on his side, stating: “I’m sure this is not easy or comfortable for you. But I want you to just relax and know that I’m here for you.”

Of course DeAndre, being a young male from Texas, never expected the sort of exposure his story has garnered. Even so, he understood the need to stick to his guns and refuse to cut off his dreadlocks, which are an important part of his heritage.

Speaking on the situation, Ellen said: “You get good grades. You’ve never been in trouble, ever. This is the first time anything has come up. And now, you haven’t been in school for weeks because of this situation… That’s why you’re here. Because I don’t understand this.”

As per reports, DeAndre has worn his dreadlocks for years. It was only after Christmas break that he was ordered by the school’s administration to cut them off.

“Every day I would go to school, I would be in dress code,” he explained. “But the thing with them is, if it was let down, I would be out of dress code.”

“It’s really important to me because my dad is from Trinidad,” DeAndre told Ellen. “And I really wish the school would kind of be open to other cultures and just, at least let us try to tell you some things. Don’t just shut us out.”

In typical Ellen fashion, she decided to take on DeAndre’s fight. Turning to the cameras, she issued a plea.

“I think that’s what school’s supposed to do, is teach you about other cultures. You’re not supposed to teach them. They’re supposed to teach you… I am begging you. This kid is a good kid. He deserves to graduate, to walk with all the other kids. He’s a good guy. I just am urging you to do the right thing. Please.”

It was then that R&B icon Alicia Keys walked onto the stage to present DeAndre with a $20,000 scholarship to attend college and study to become a veterinarian.

Only time will tell if the school accepts that what they’re doing is unfair and allow DeAndre to come back into the fold.

Share this article if you want to send your support to this brave boy in his fight!