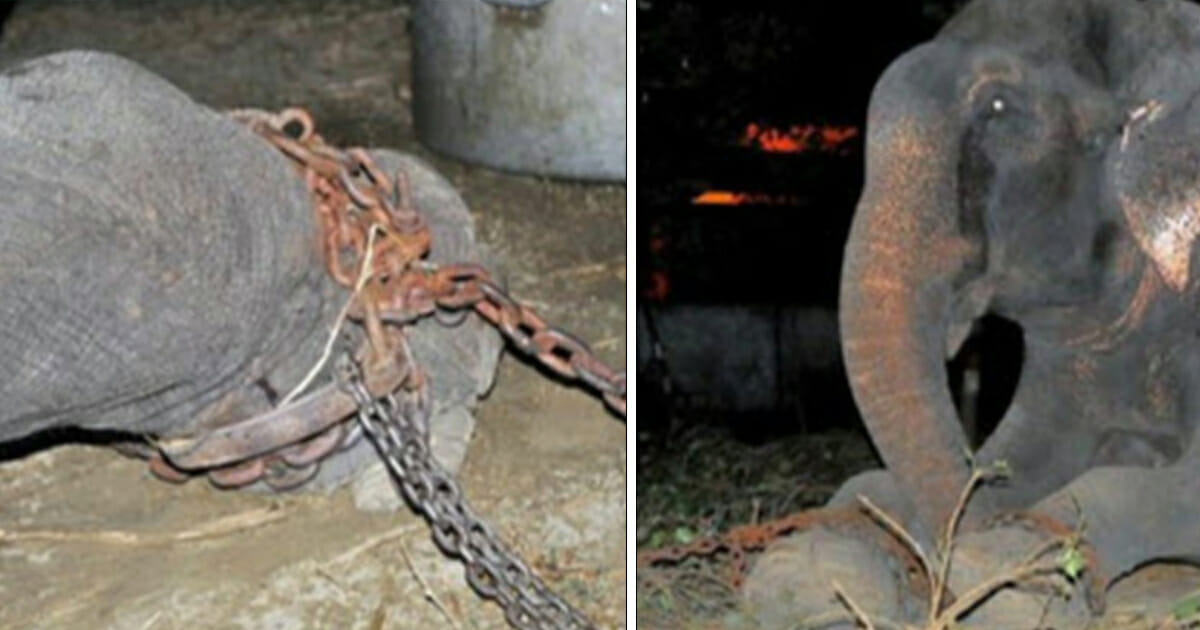 Love and compassion for the creatures we share this planet with are feelings all of us should have.

The idea that certain people in this world are okay with the idea of abuse, neglect, and abandonment happening disgusts me, but sadly it’s a reality we all need to be aware of.

For 50 years, Raju the elephant was shackled in spikes chains, left with no choice but to survive on scraps from tourists. His was a miserable life, one made all the more worse by the abuse he suffered at the hands of his captors.

That came an abrupt end back in July, 2014, when this magnificent creature was finally rescued in a mission that garnered international attention.

As per the Huffington Post, Wildlife SOS, a group set up in 1995 with the aim of protecting and rescuing endangered wildlife in India, set out to free Raju from his torment on July 2, 2014.

It’s thought Raju was 50 years old at the time, and had been captured as a baby. What followed was a buying and selling process that turned the helpless elephant into a commodity to be exploited for the entertainment of tourists.

He was eventually forced to work as a begging elephant in Allahabad, India. Shackled in spiked chains, his ability to move was not only hindered, but the spikes also left him with horrible wounds. On top of that, he was beaten and abused by the very captors who were profiting from his existence.

After hearing of Raju’s story through India’s Forestry Commission, Wildlife SOS knew they had to act. They coordinated a rescue attempt on the night of July 2, only to end up in a standoff with his owner.

In an effort to confuse Raju during the rescue attempt, his captors layered tighter chains on him and shouted commands to confuse him. Fortunately, their tactics were in vain. A team of 10 veterinarians and experts from Wildlife SOS, helped by 20 Forestry Commission officers and two policemen, were able to rescue Raju and deliver him into a better life.

It’s said the team noticed the elephant had tears rolling from his eyes when he realized he was finally being set free.

“Raju was in chains 24 hours a day, an act of ­intolerable cruelty. The team were astounded to see tears roll down his face during the rescue,” Pooja Binepal, a spokesman for Wildlife SOS, said, according to the Daily Mail.

“It was incredibly emotional. We knew in our hearts he realized he was being freed. Elephants are majestic and highly intelligent animals. We can only imagine what torture the past half a century has been for him.”

Raju was thereafter taken to the Elephant Conservation and Care Centre in Mathura, where he could begin the healing process that would be his introduction to a new and caring life.

Watch the video below to see Raju’s daring rescue:

Since elephants can live in excess of 70 years, Raju’s rescuers hope he can have at least ten years of comfort and love.

Thank you to the brave souls who saved this elephant’s life.