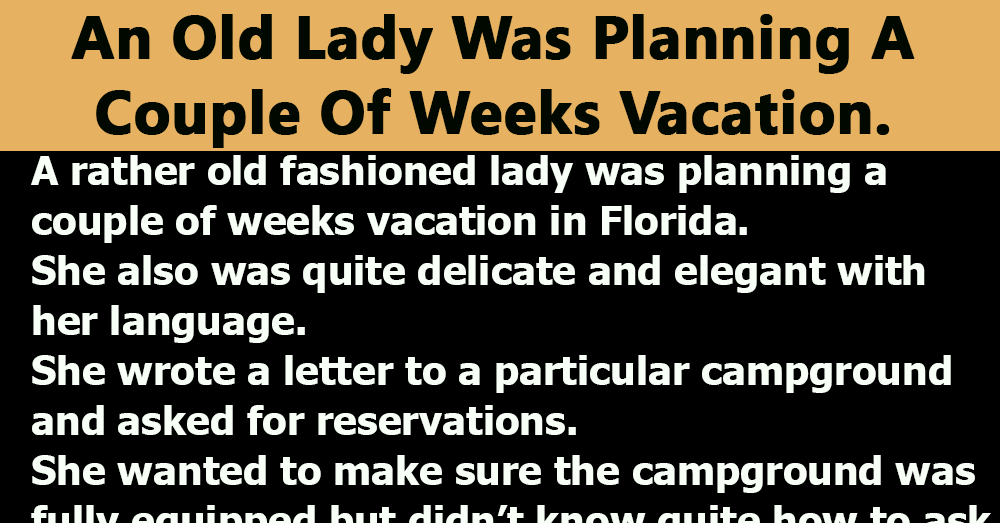 A rather old fashioned lady was planning a couple of weeks vacation in Florida.
She also was quite delicate and elegant with her language.
She wrote a letter to a particular campground and asked for reservations.
She wanted to make sure the campground was fully equipped but didn’t know quite how to ask about the “toilet” facilities.
She just couldn’t bring herself to write the word “toilet” in her letter.
After much deliberation, she finally came up with the old fashioned term “Bathroom Commode,” but when she wrote that down, she still thought she was being too forward.
So she started all over again; rewrote the entire letter and referred to the “Bathroom Commode” simply as the “B.C.”.
Does the campground have its own “B.C.?” is what she actually wrote.
Well, the campground owner wasn’t old fashioned at all, and when he got the letter, he couldn’t figure out what the lady was talking about.
That “B.C.” really stumped him.
After worrying about it for several days, he showed the letter to other campers, but they couldn’t figure out what the lady meant either.
The campground owner finally came to the conclusion that the lady was and must be asking about the location of the local Baptist Church.
So he sat down and wrote the following reply:
“Dear Madam: I regret very much the delay in answering your letter, but I now take pleasure of informing in that the “B.C.” is located nine miles north of the campsite and is capable of seating 250 people at one time. I admit it is quite a distance away if you are in the habit of going regularly but no doubt you will be pleased to know that a great number of people take their lunches along, and make a day of it….. “
“They usually arrive early and stay late. The last time my wife and I went was six years ago, and it was so crowded we had to stand up the whole time we were there. It may interest you to know that right now, there is a supper planned to raise money to buy more seats…..”
“They plan to hold the supper in the middle of the “B.C.”, so everyone can watch and talk about this great event…..I would like to say it pains me very much, not to be able to go more regularly, but it is surely not for lack of desire on my part…
As we grow older, it seems to be more and more of an effort, particularly in cold weather…..
If you decide to come down to the campground, perhaps I could go with you the first time you go…sit with you…and introduce you to all the other folks….. This is really a very friendly community