Home
Uncategorized
An Elderly Woman Walked Into The Main Office. –

An elderly woman walked into the main office of Chase Manhattan Bank building, holding a large paper bag in her hand.

She told the young man at the teller’s window that she wished to deposit the $3 million in the bag and open an account at the bank.

She said that first, though, she wished to meet the president of the bank due to the amount of money involved.

The teller thought that to be a reasonable request, and, after opening the bag and seeing bundles of $1000 bills, which amounted to approximately $3,000,000, telephoned the bank president’s secretary for an appointment for the lady.

The woman was escorted upstairs and ushered into the president’s office.

Introductions were made, and she stated that she liked to get to know people she did business with on a more personal basis.

The president then asked her how she came into such a large sum of cash.

“Was it inherited?” he asked.

He was quiet for several seconds, trying to think of where this elderly lady could possibly have come into $3 million.

“as in people”. Seeing his confusion, she explained that she just bet on different things with people.

The bank president figured she must be off her rocker and decided to take her up on the bet. He didn’t know how he could lose.

For the rest of the day, he was extremely cautious—he decided to stay home that evening and take no chances.

When he got up in the morning and took his shower, he checked to make certain that everything was O.K.

There was no change in his scrotal appearance. He looked the same as always.

He went to his office and waited for the woman to come in at 10 AM, humming as he went.

He knew this was his lucky day. How often did he get handed $25,000 for doing nothing?

At 10 o’clock sharp, the woman was shown into his office. With her was a man.

When the bank president asked her what the other man was with her for, she informed the president that he was her lawyer and she always took him along when there was this much money involved in her betting.

“what about our bet?”

The old lady asked him to drop his pants so they could all see.

The old lady peered closely at his balls and then asked if she could feel them.

Just then, he noticed that the lawyer was quietly banging his head against the wall.

The president asked the old lady, “What’s wrong with him?” 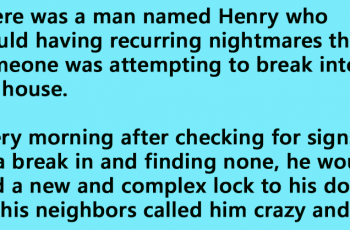 There was a man named Henry who would having recurring … 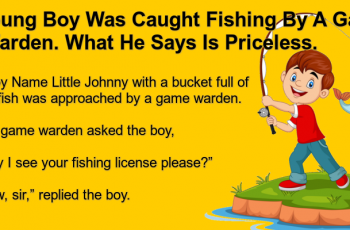 A boy Name Little Johnny with a bucket full …