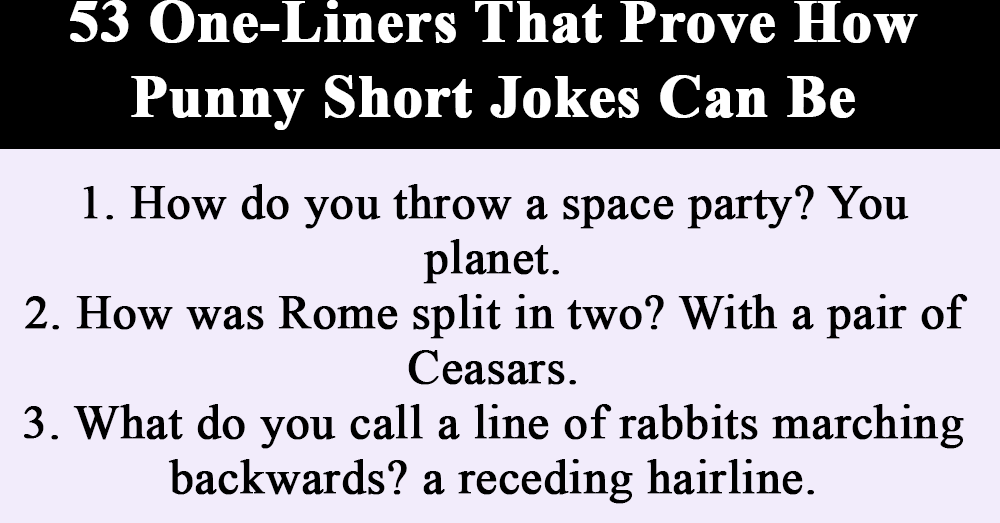 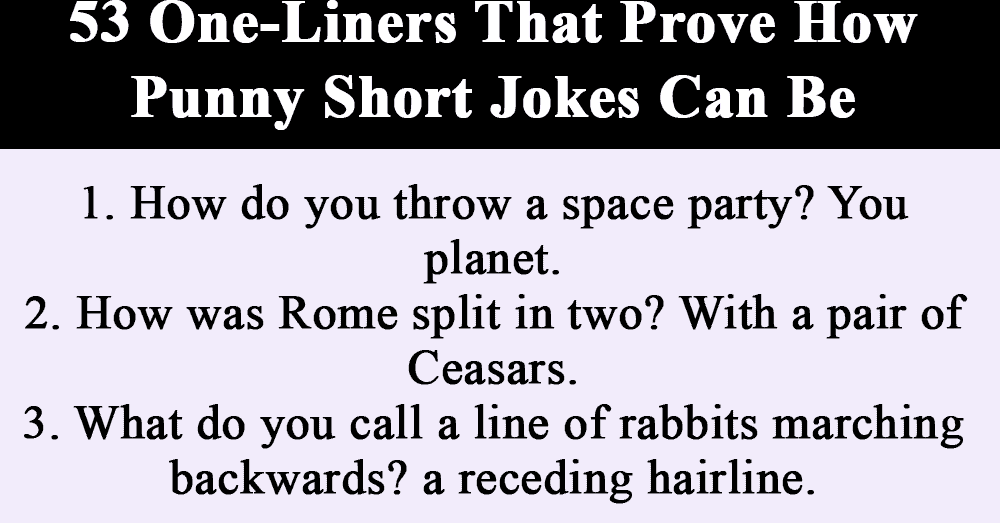 I don’t know about you, but I absolutely love to laugh. In fact, if I’m not laughing at least a dozen times a day, I’m looking for another reason to put a smile on my face. It doesn’t matter if it is listening to a comedy routine on my way to work, watching a funny movie or even hearing a good joke, they all have the benefit of making me crack up. If you are short on smiles, then we have something that is just what you need. It is 53 short jokes that fall somewhere between a pun and a one-liner. Enjoy all of the laughs!

1. How do you throw a space party? You planet.

2. How was Rome split in two? With a pair of Ceasars.

3. What do you call a line of rabbits marching backwards? a receding hairline.

4. The shovel was a ground breaking invention, but everyone was blow away by the leaf blower.

6. a Buddhist walks up to a hot dog stand and says “Make me one with everything.”

7. Did you hear about the guy who lost the left side of his body? He’s alright now.

8. What do you call a girl with one leg that’s shorter than the other? Ilene.

9. The broom swept the nation away.

10. I did a theatrical performance on puns. It was a play on words.

11. What does a clock do when it’s hungry? It goes back for seconds.

12. What do you do with a dead chemist? You barium.

13. I bet the person who created the door knocker won a nobel prize.

14. Towels can’t tell jokes. They have a dry sense of humor.

15. Two birds are sitting on a perch and one says “Do you smell fish?”

16. Did you hear about the cheese factory that exploded in france? There was nothing but des brie.

17. Do you know sign language? You should learn it, it’s pretty handy.

18. What do you call a beautiful pumpkin? GOuRDgeous.

19. Why did one banana spy on the other? Because she was appealing.

22. What do you call a cow with all of its legs? High steaks.

24. after the accident, the juggler didn’t have the balls to do it.

26. To write with a broken pencil is pointless.

28. I couldn’t remember how to throw a boomerang but it came back to me.

29. What did the buffalo say to his son? Bison.

31. How does Moses make coffee? Hebrews it.

32. The energizer bunny went to jail. He was charged with battery.

33. What did the alien say to the pitcher of water? Take me to your liter.

34. What happens when you eat too many spaghetti-o’s? You have a vowel movement.

35. The soldier who survived mustard gas and pepper spray was a seasoned veteran.

36. Sausage puns are the wurst.

38. How did Darth Vader know what Luke was getting him for his birthday? He could sense his presence.

39. Why shouldn’t you trust atoms? They make up everything.

40. What’s the difference between a bench, a fish, and a bucket of glue? You can’t tune a bench but you can tuna fish. I bet you got stuck on the bucket of glue part.

41. What’s it called when you have too many aliens? Extraterrestrials.

43. What do you call a fake noodle? an impasta.

44. What do cows tell each other at bedtime? Dairy tales.

45. Why can’t you take inventory in Afghanistan? Because of the tally ban.

46. Why didn’t the lion win the race? Because he was racing a cheetah.

47. Why did the man dig a hole in his neighbor’s backyard and fill it with water? Because he meant well.

48. What happens to nitrogen when the sun comes up? It becomes daytrogen.

49. What’s it called when you put a cow in an elevator? Raising the steaks.

51. Why did the tomato turn red? Because it saw the salad dressing.

52. What kind of car does a sheep drive? a Lamborghini, but if that breaks down they drive their SuBaHHru.