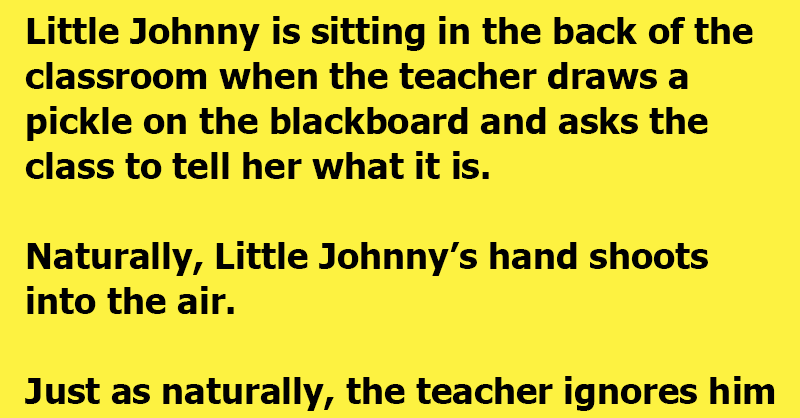 Little Johnny is sitting in the back of the classroom when the teacher draws a pickle on the blackboard and asks the class to tell her what it is.

Just as naturally, the teacher ignores him because the teacher has had enough of Little Johnny’s antics for one lifetime.

Little Johnny is not to be denied, however, and yells out “I know what that is, teacher! It’s a pen*s!”

The teacher just stares at Little Johny, then bursts out in tears and runs from the classroom.

The class is stunned and starts quietly discussing what happened when the principal storms in and goes on a tear.

“Alright you little hooligans! Your teacher was just in my office sobbing, just like she’s done every day this week! Which one of you upset her today? And who drew that pen*s on the blackboard?”

A Little Johnny walks into a general store, walks up to the owner and asks for a job:

The Little Johnny says. “I don’t know. I think so.”

Owner says. “I’ll tell you what. Next customer comes in, you watch me. If you think you can do what I do, you have a job!”

A few minutes later a customer comes in.

The owner of the store says.

The customer says. “Yes. I’d like to buy a bag of grass seed.”

“No problem.” Says the owner as he reaches for a bag of grass seed. “Do you think you might want a lawnmower with that?”

“Yeah.” Says the owner. “You plant that grass seed, you’re gonna have a lot of grass to cut. You might want to get a lawnmower too.”

The customer thinks it’s a great idea and agrees.

The owner sells him the grass seed and the lawnmower and the customer leaves.

The owner turns to the Little Johnny and says.

“See that? That’s selling! The guy wanted some grass seed and I sold him a lawnmower too! You think you can do that?”

The Little Johnny says. “Yeah, he can do that.”

So the owner says.

“Great. Next customer comes in is yours. I’ll just stand here quietly and watch. We’ll see how you do.”

A few minutes pass by and another customer comes in.

The Little Johnny says. “Can I help you?”

The customer says. “Yes. I’d like to buy a box of Tampax for my wife.”

“No problem.” Says the Little Johnny as he reaches for the box of Tampax.

“Do you think you might want a lawnmower with that?”

“You’re not going to be doing anything else for the next 7 days, you might as well cut the grass!”