An elderly couple had shared most of their lives together. However, the husband was a bit “tight” with money. He carefully saved every penny he earned during his lifetime – and only spent it when it was absolutely necessary. Even though he’s had a fantastic salary until retirement.

“Of course, I swear”

Therefore, he amassed a substantial fortune, but despite his wife’s pressure, he stubbornly continued to skimp on expenses.

One day, however, he became very ill. Pretty soon, he and his wife, sadly, found out that he didn’t have much time left. With tears in his eyes, the old man looked at his wife and begged her:

“Can you promise that I’ll be buried with all my money?” he asked. “Every single penny!”

His wife, surprised by the stingy request, felt angry, but out of empathy for her dying husband accepted:

“Of course, I swear,” she replied, taking surprisingly well the fact that she would soon be a penniless widow.

Puts a shoebox next to him

The man, as expected, died not too long after. Friends and family gathered in the church for a final farewell. But just as they were getting ready to close the casket, the wife shouts:

She walks to her husband and puts a shoebox right next to him in the casket.

After she goes back and sits down, one of her friends whispers:

“What was that about?”

“I swore he would be buried with all his money. And I kept my promise.”

“Are you stupid? Why would bury that stingy old man with all his money?!”

“Yep, every single penny. I’m a Christian woman – and I always keep my word.”

“But he had millions! How did all that money fit in that tiny shoebox?”

“Well,” she smirked. “I’ve kept all the money in my account and printed out a check for him, all he has to do is cash it in…” 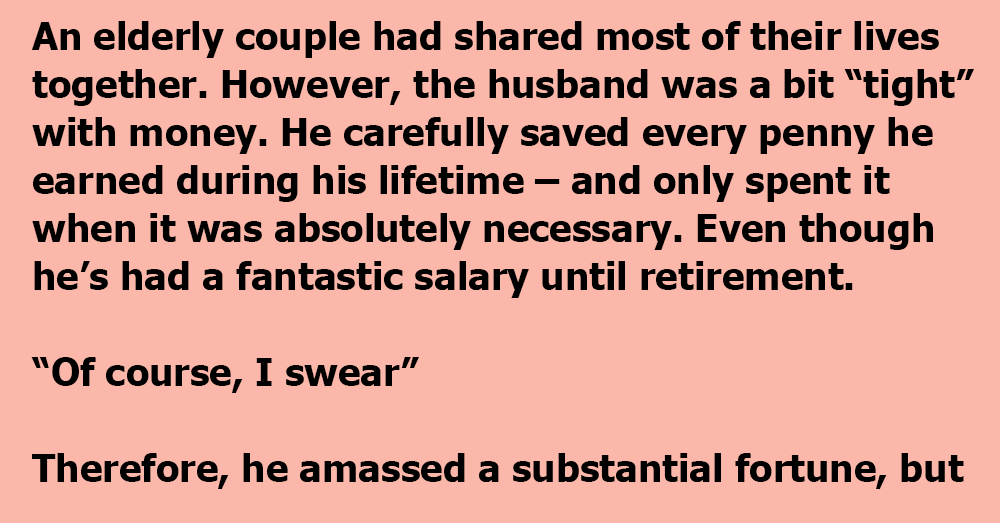