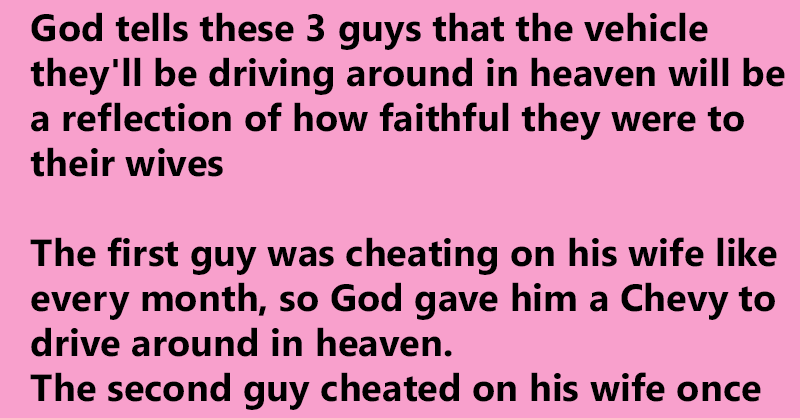 The first guy was cheating on his wife like every month, so God gave him a Chevy to drive around in heaven.

The second guy cheated on his wife once or twice over the years, but overall was pretty faithful, so God gave him an Acura to drive around in heaven.

The third guy never cheated on his wife at all and was the most faithful he could have possibly been, so God gave him a Rolls-Royce to drive around in heaven.

Sometime later, the first and second guy found the third guy sitting down crying. When they asked him what was wrong, he said “I just saw my wife riding down the road on a skateboard.”

An elderly couple was having dinner one evening when the husband reached across the table, took his wife’s hand in his and said, “Martha, soon we will be married 50 years, and there’s something I have to know. In all of these 50 years, have you ever been unfaithful to me?”

Martha replied, “Well Henry, I have to be honest with you. Yes, I’ve been unfaithful to you three times during these 50 years, but always for a good reason.

Henry was obviously hurt by his wife’s confession, but said, “I never suspected. Can you tell me what you mean by ‘good reasons?’”

Martha said, “The first time was shortly after we were married, and we were about to lose our little house because we couldn’t pay the mortgage.

Do you remember that one evening I went to see the banker and the next day he notified you that the loan would be extended?”

Henry recalled the visit to the banker and said, “I can forgive you for that. You saved our home, but what about the second time?”

Martha asked, “And do you remember when you were so sick, but we didn’t have the money to pay for the heart surgery you needed? Well, I went to see your doctor one night and, if you recall, he did the surgery at no charge.”

“I recall that,” said Henry. “And you did it to save my life, so of course I can forgive you for that. Now tell me about the third time.”

“Alright,” Martha said. “So do you remember when you ran for president of your golf club, and you needed 73 more votes?”