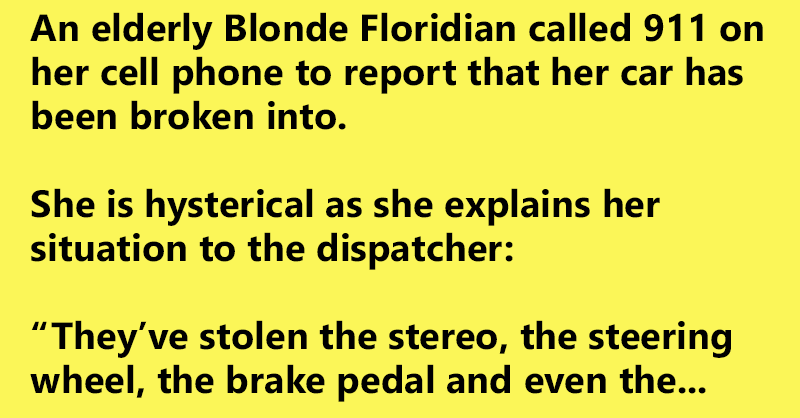 An elderly Blonde Floridian called 911 on her cell phone to report that her car has been broken into.

She is hysterical as she explains her situation to the dispatcher:

“They’ve stolen the stereo, the steering wheel, the brake pedal and even the accelerator!” she cried.

“Stay calm. An officer is on the way.”

A few minutes later, the officer radios in.

“She got in the back-seat by mistake.”

She bought a new car, and on the way home from the dealer got caught in a terrible hail storm.

Her brand new car was dented all over.

When she got home she called the service department to ask what she should do.

The service chief, being a prankster, told her to wait till the car was cool and then blow hard on the tail pipe, which would pop out all the dents.

A half-hour later her roomies saw her on her knees behind the car, blowing as hard as she could.

They asked what the heck she was doing and she told them, adding in a perplexed tone “But it’s not working”.

“You dummy” one of her blond roommates said. “You have to roll up the windows first!“